I see Gray was on his usual hypocrites horse today in FMQs as he tried to pin the blame for the mess in Aberdeen council on the SNP. Another blast rips in to the feet of Elmer Fudd.

Any cuts in the Aberdeen City Council are due to Labour leaving a £20 Million black-hole in the Education and Social work budgets between 1997 and 2003. Whenever Labour take charge, they always seem to leave a path of destruction behind.

Westminster, Glasgow. And the second time in three decades they have ruined the UK economy. What a bunch of lying losers.
Posted by Key bored warrior. at 21:57 1 comment:

A bit rich this considering the source:....."Two important sectors of our society now feel under a great deal of pressure, beset by plunging fortunes and public esteem: newspapers and politicians. As they go down they are turning in on each other with increasing viciousness - politician against journalist, politician against polititian, [note the spelling mistake, not mine, the square brackets are, as I know Elmer Fudd is a regular reader of my work] journalist against journalist.
Dog eat dog."
We live in interesting times, Sheridan must be chortling.
Posted by Key bored warrior. at 17:17 No comments:

19 Jan 11
More than 100,000 new state-of-the-art lightweight SA80 rifle magazines have arrived in Afghanistan to be used by troops fighting on the front line.
30-round Magpul EMAG magazine
]
The 30-round Magpul EMAG magazine is around half the weight of a standard metal magazine and helps reduce the weight that soldiers have to carry in their kit.
Made from a polymer, the EMAG weighs 130g compared to its metal equivalent of 249g. Troops carry up to 12 magazines, so this change means each carries around one kilogramme less weight in total than before. 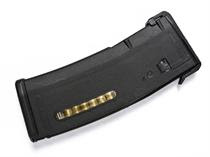 When I had my boots on in the 70s we were asking for kit like this for the old SLR and SMG which was notorious for misfires and jamming in dusty conditions. Procurement is a joke.

Guido just took a peek at the rulings of the advisory committee on former ministers’ appointments. For all the city bashing going on this week from the red benches, it seems Gordon’s old lot, especially those advising him on money matters, couldn’t sign up to the financial world soon enough. Working directly for banks or investment firms are:

Funny there hasn’t been a big job offer for Brown yet. No bank wants that curse, but there is no problem for those who were around him when he drove the nation’s finances into a brick wall. Underwhelming in government, this lot have not been lapped up for the skills they clearly didn’t display in power, but for their contact books and access. The banker bashing from Labour doesn’t quite ring true when there is a queue forming for the revolving door. Bonuses all round!
Posted by Key bored warrior. at 20:41 1 comment:

Politicians, local authority “executives”, MPs, big business, indeed almost everyone and thing that crosses your path, no longer seems to have any interest in actually serving you. Their one motto in common seems to be “Let’s make money”.

We will all have stories of how we tried to deal with a big company, or with the local council, or with government, and found ourselves knocked back and stymied at every turn because no one cares. Everything seems to be done for the benefit of the management, and their survival; nothing for the customer. And the more that we are described as customers (hospitals, where we used to be patients; job centres, where we used to be clients; councils where we used to be taxpayers), the less we are treated as such.

Once upon a time you could walk into a BT office and sort out service problems. Now it all has to be done by phone, which is, as I found out a few years ago when my phone line and Internet service went down, rather difficult when you HAVE NO PHONE. And your calls take hours to get dealt with.

Thatchers justification for privatisation was designed to provide us with competition which would lead to cheaper and better service. Wrong. It leads to a few rich people making more money and was designed to do such.

They work on the basis that you aren’t “allowed” to see or talk to them face to face, and that after a while most people get fed up with sending emails or letters to no avail. A recent e-mail to the 129 MSP troughers in Holyrood, ilicited 3 responses. As for Councillors...are they afraid of them? No. Councillors can’t do anything to them. They aspire to be an MP or MSP or MEP. Buggins turn will serve them well, if they keep the head down and parrot the party line. Then it's out with the large fiddle. Councillors only play at the fiddle. Unless you are a Labour councillor in Lanarkshire, there in lies another mighty tome.

Don’t try to get them to do anything for you. I’ve failed miserably. My emails are replied to with platitudes and no action. But people in management in the local council are scared of no one. It is difficult to sack anyone in the local authority, and once they are at management level almost nothing will budge them, and probably even then they will leave within with a hefty compensation package. They are compensated for being crap.

They surround them selves with a Teflon army who are all adept at speaking the new language of Teflonese. They all live in a self perpetuating bubble of self interest and self aggrandisement, to the detriment of us plebs. These executive bureaucrats have elevated public troughing to an art form in the shape of super salaries, gold plated pensions, expenses from heaven, and diamond studded contracts which are packed with parachutes of the finest silk. These people are the Untouchables. Elliot Ness can teach them nothing.

Take the case of the Civil Service Humphries who are posted to Afghanistan to oversee Whitehalls procurement incompetence. They are gifted bonuses which are greater than the annual salaries of the troops who are in harms way every day through their incompetence. Who when they come home maimed and disabled are treated like second class citizens by these Humphries compared to their Teflonese army.

Remember when councillors were saying if they didn't get a 'salary' then we wouldn't get 'quality' councillors to represent us? Under the old system when we had one councillor who we knew for certain represented us you could with persistence get results, and they were allowed to play the violin with their remuneration's. Now we have as far as I can see at least 4 maybe 5 councillors who represent us in my area and all salaried costing us much more, and you would get more response talking to one of the unlit lamp post in the street than you get from them.

The justification for these gold plated positions especially in the banking sector is always that you have to pay these fabulous salaries to attract the best people. I can think of several cases where a well fed monkey on Buckfast could do better. The chief executive of RBS is set to win his bonus for the year of several million pounds. If someone with an ounce of common sense could not turn round the performance of a failed organisation, without phone number remunerations then something has short circuited. Give any competent housewife the books and she would fix it, for 1% pf the money. 1 and 1 still makes 2 even if you are paid gazillions a year to sit in your leather chair and play with your executive toys, inventing even more cunning plans to deflect the plebs.

I can understand how revolutions take hold and why the establishment are so very afraid of them.
Posted by Key bored warrior. at 21:00 2 comments:

Sudan held a referendum on Jan. 9 to decide whether to split into two sovereign countries. Here's a sampling of other places vying for independence — some with more legitimate claims for freedom than others

Posted by Key bored warrior. at 22:24 No comments: