THIS IS VERY FRIGHTENING STUFF

Animal Defenders International today released shocking footage from behind the scenes at the winter quarters of Bobby Roberts Super Circus, which graphically shows violence and confinement of circus animals.

Posted by Key bored warrior. at 20:40 No comments:

Posted by Key bored warrior. at 14:09 No comments:

Posted by iain macwhirter at 10:50 AM


UK Nuclear power programme has just gone up in smoke.

There is a long established protocol for dealing with accidents at nuclear power plants.   First. the authorities insist there is no possibility of radiation escaping and that the public shouldn't worry.  Then various nuclear experts appear on television saying that this accident shows just how safe nuclear power really is because it can withstand earthquakes and tsunamis.   As the reactors explode one by one we are told that the detonations don't mean much because the nuclear containment vessels cannot be penetrated.   Until they are.  But even then we are told not to worry because any radiation leak will be less than background radiation in the granite city of Aberdeen.  The final act is always the same.  It emerges that nuclear fuel rods have been exposed,  radiation is pouring into the atmosphere, and that there is a potential catastrophe in the making.


At the striken Fukushima Daiichi plant in northern Japan, selfless power station workers risk their lives to try to put out the nuclear fires.  Last night it emerged that radiation at the nuclear power station had reached at a critical level of  400 millisieverts an hour.  The normal 'safe' dosage of radiation is 100 milliseverts A YEAR, according to the World Health Organisation.  The plant managers were reduced to hosing sea water from fire engines onto superheated reactors cores in a desperate attempt to prevent a meltdown . Then one of the fire engines runs out of fuel.


And so history repeats itself as tragedy as well as farce.   Windscale, 1957, Three Mile Island, 1978 and Chernobyl, 1986 and now in Fukushima Daiichi. This, though, must be the ultimate nuclear nightmare:  a disaster of epic proportions in the country, Japan, which has led the world in the development of supposedly safe nuclear power generation.    We don't know what is going to be the final fate of Fukushima Daiishi - but one thing we do know for certain:  civil nuclear power is finished. This is the end of the nuclear dream.  It finally died when the third explosion ripped through those innocent-looking concrete blocks on Tuesday 15 March 2011.

You only need to see the pictures of men in radiation suits holding geiger counters over children.    The UK government might as well cancel its programme for building 10 nuclear power plants because they will never happen.  The public will  never allow them to be located anywhere near population centres and if the government is stupid enough to try, it will find itself engaged in a protracted and bitter legal argument that it simply cannot win.


As a long standing critic of nuclear power I take no pleasure in this.  I have long argued that nuclear generation is an unreliable and ruinously expensive means of generating electricity.   There is no safe method yet discovered for solving the problem of highly toxic nuclear waste.  Nuclear power stations are vulnerable to  natural disasters and terrorist attack.   I didn't expect to be proved right in Japan, though.  If any country in the world could harness civil nuclear power it was surely Japan - the one country that has experienced the devastation of nuclear attack.


However, over the years of relentless lobbying from the nuclear industry, and given the signal failure of politicians to take renewable energy seriously, we had all become cowed into nuclear submission, nuclear quiescence.    Anyone who questioned the viability of nuclear power has been dismissed as a green luddite out of touch with scientific advance.   Didn't we know that the modern nuclear power stations are ultra-safe?  That accidents like Three Mile Island and Chernobyl are impossible now?  We were told that by opposing nuclear power we are allowing the planet to cook just because of a irrational fear of the ultimate green power source.


I half believed it myself.  I don't have any prejudice against nuclear fission and I really wanted to believe that it was possible to make them safe.  A get-out-of-jail-free card for climate change. It would clearly the best option for generationg the kind of base load electricity supply that modern society demands without using fossil fuels or generating harmful carbon emission.   Unfortunately though, nuclear power stations have  a habit of emitting something even worse.


The nuclear industry seems incapable of learning the first lesson of public relations - that if you have bad news you simply have to get it out as early as possible = even at the risk of causing public alarm. The danger of delay is too great.  People cease to believe what they are being told and the there is melt-down in official credibility.


Anyway, it's finished now. Over.   The resources that were being channelled into nuclear must now be devoted to real development and exploitation of the only safe and abundant non fossil fuel: wind and wave.  The billions that were going to go into building a new generation of nuclear power plants should go into a crash programme for developing tidal power in the Pentland Firth - the Saudi Arabia of renewables.


It might take a generation to harness the power of the tides, but the sooner we get started the better.  Nuclear power is over.  It died this week.
Posted by iain macwhirter at 10:50 AM


If Nuclear is so cuddly and safe and wonderful why will they not show us how much they believe that by rebuilding Battersea as a nice green goo goo ga ga oochy coo power generator right in the heart of where they need all this electricity, and right opposite the people who are advocating it?
What a shot in the arm that would be for the Nukes. MPs putting their money where their mouth is, instead of into their mouths.
We were told in the fifties that Nuclear power would be to cheap to meter…..LIES
We are being told that Windscale and Dundrennan and child leukaemia cluster around the Galloway area, are not connected, but hey we will keep the data secret anyway, to protect the innocent……LIES
We are told that the increase in cancer rates in the Western isles just after the Chernobyl cloud past over in heavy rain, is not abnormal….LIES
The nuclear industry track record of lies, secrecy and disregard for public health and safety is appalling, just look at the history of Dounreay. So safe it was ‘given’ to Caithness, the most remote and sparsely populated area of the UK. Dounreays legacy will be there forever as long as we have tenancy of this planet.
Weapons of Mass Destruction, Mutually Assured Destruction, all inextricably linked to nuclear power it is time to stop this madness before it stops us all for good.

Posted by Key bored warrior. at 11:23 No comments:

via johnosullivan on 3/9/11
German ministers and scientists finally abandon the global warming hype and  preach ‘climate disruption’ claims as last hope for new raft of taxes.
Germany’s Federal Ministry of Education and Research (FMER) has signalled a decisive switch in global warming policy. In it’s latest official press release titled, ‘Cold Winter in Europe Does Not Question Climate Change’release (February 22, 2011) Germany’s pro-green government finally fell into line with the U.S. and British environmental campaigners; global warming is dead and ‘climate disruption’ lives in the most populous (82 million inhabitants) nation of the European Union (EU).
Germany has long been a major force in the climate wars and Angela Merkel and her Christian Democratic Union (CDU) government, in particular, have shaped wider EU climate policy. With the realization that scares over catastrophic global warming have fooled no one Merkel is pinning her green taxation hopes on the ‘climate disruption’ banner.
Posted by Key bored warrior. at 22:01 No comments:

Lots of pious blogging on walls in Iraq and Israel.


Lest we forget there are walls in British cities keeping apart sectarian knuckle dragger's who would at the drop of a dustbin lid tear each other to bits. 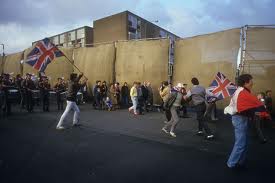 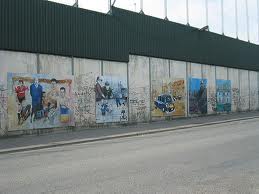 Posted by Key bored warrior. at 19:46 No comments: