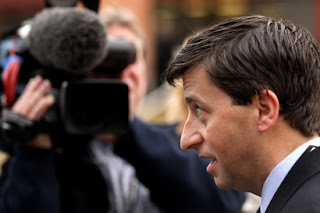 I actually took time to read @Douglas Alexanders speech from Stirling University. It was depressing London Labour tripe. Full of hypocrisy and irony. One paragraph stood out like a sore thumb.

"It takes only a few moments to read the hate filled outpourings of the so called “Cyber-Nats” on the threads of the Scotsman and other websites to appreciate this point: With their claims of treason, attacks on ‘London Labour’ and general intolerance, to everybody and anybody who does not share their outlook. To my mind these nationalists challenge the very suggestion of a more pluralist, open, discursive politics if ever their Party were to prevail in its primary purpose."

So in Dougies adventures in Alexanderland, his sister fell down a rabbit hole drank a magic potion and became very small. She then ate some cake and her head became so big, she had to leave Holyrood, on the advice of  a big blue hairy caterpillar. And only posts that support unionism are allowed in Alexanderland. How dare these CyberNats get allowed to post on forums. They are doing this deliberately.

One could be forgiven for thinking that The Scotsman forum only carried nice fluffy cuddly comments from Unionist supporters. Not the Scotsman I have been reading on line these past few years. Some of the bile posted on that forum by the likes of Grahamski, AM1, AM2, Yeah1 and many more, was positively depressing in it's anti Scottish bigotry but Douglas seems to not have ever seen this, how very peculiar.

However the share price of Johnston Press resides in the penny shares basement along with the reputation of The Scotsman, which has now reverted to a generic type of forum that practically throttles discussion the way the BBC blogs do. So I guess you reap what you sow. The CyberNats are all over the internet forums for a very good reason, the MSM in Scotland is inherently unionist biased. Thank God for the internet.


I wonder if this kind of posting is invisible to Douglas Alexander?

The neo-Braveheart of the double breasted suit and the smug coupon relaxes safe in the knowledge he will reign supreme if his dream of independence is delivered by the intellectually challenged. He will be less smug when many below forty with ambition and talent depart the newly independent land of heather and the short bread tin leaving him with a kailyard populated by the welfare addicted, druggies, alkies, the workshy and the feckless. But, wealthy by then, Alex Salmond will happily depart the political scene along with his pensioner wife and with nary a care about the gullible who won him the referendum.

251 - Commiserations. I'm sure as already proven on here, you will meet people of the cybernut ilk. For example, they whinge and whine about the Channel Tunnel but haven't the brain power to actually do some research and find out it was built using private funds. They tend to have quite an unbelievable sheep mentality. One of them comes up with a "victims of the English" notion and they all buy into it without thinking or doing any research into. They were their "victims of the English" badge with pride.

278 I do look forward to your dear leader's shrieks of outrage when the referendum is taken out his hands...It's no fair, they're making the Scottish folk decide on their future...

(The Dear Leader slur by the slimy Grahamski of course refers to Kim Jong Il, the vile brutal murdering dicatator of North Korea. We also had Cochrane  in an article in the Telgraph, referring to Alex Salmond as Il Duce, The Italian dictator Benito Mussolini)

335 - Come in handy for what exactly? Why you cybernuts have this view that Salmond will dictate to the UK government how the UK will be run is at best laughable and at worst tragic. Cameron is playing hardball and he has proved it already by sending Salmomd home with his begging bowl empty and a face like a slapped erse.

52
Exiled Leither,
07/10/2011 01:27:51
The squirming by SNP officials shows that this order came from the Big Fish himself.
On one hand I dont think we should be bowing to the grand whims of a meglomaniac such as Salmond. But, on the other hand it will provide a much easier target for snipers while he surveys his empire. So swings and roundabouts?

71
Exiled Leither,
07/10/2011 07:35:25  Clearly I am not advocating anything but as the tyranical leader of a cult and political order, security should be top of his priorities.


150
Grahamski,
Falkirk 07/10/2011 09:53:48  After the dear leader's ludicrous thought-crime legislation is forced through Holyrood there will be no football ground in the country where the tubby wee mountebank will be made welcome...


Addressing Scottish Labour’s conference in Glasgow, Gray said: “This afternoon we begin the process proper of electing a new Scottish leader for a new devolved Scottish Labour party.
“I say to the candidates, don’t kid yourself. You will be attacked. You will be smeared. You will be lied about. You will be threatened.
“The cybernats and the bedsit bloggers will call you traitor, quisling, lapdog and worse.
“They will question your appearance, your integrity and your sexuality.
“They will drag your family and your faith into the lies and the vitriol. If you are a woman, it will be worse.
“It is no consolation to know that any journalist or commentator who gives you a fair hearing will suffer the same.
“This is the poison some have brought into our politics and it is vile.”


Is it only the cybernats you can see Iain?


What about prospective candidate Johann Lamont using the rape of a poor woman to fabricate a pathetic bitchy story in her spell in your seat in Holyrood. We've not heard a lot of apologies on that front Iain, how far does your moral compass swing?
Posted by Key bored warrior. at 21:05 2 comments:

I LOVE THE AUSSIES