A SONG FOR SCOTLAND:


http://keyboredwarrior.blogspot.co.uk/2012/06/what-bloody-joke.html
Posted by Key bored warrior. at 22:39 No comments:

Email ThisBlogThis!Share to TwitterShare to FacebookShare to Pinterest
WHAT A BLOODY JOKE. WHAT A BLOODY PICTURE. TORYS AND LABOUR IN CAHOOTS VOTING SCOTLAND DOWN. NEGATIVE BITTER AND MEANINGLESS:
Darling launches ‘Better Together’ campaign but cuts and negativity form backdrop Monday, 25 June 2012 18:45

By a Newsnet reporter The pro-Union ‘Better Together’ campaign was officially launched today in Edinburgh by former Chancellor Alistair Darling.

The Labour MP was joined by former Scottish Conservative leader Annabel Goldie and her replacement Ruth Davidson. Also present were Scottish Labour leader Johann Lamont, her deputy Anas Sarwar and Scottish Lib Dem leader Willie Rennie. The No campaign has been billed as the focal point for those who wish Scotland to remain in the Union and campaigners have insisted that it will rely heavily on positive messages. However the launch suffered an embarrassing setback when it coincided with welfare cutback proposals announced by UK PM David Cameron.

The campaign also came in for criticism after opponents claimed it was “mired in negativity” and contained “threadbare” arguments. The campaign brings together an alliance of Labour, Conservative and Lib Dem parties in a partnership aimed at thwarting the hopes of the pro-independence Yes Scotland group. According to Alistair Darling, a Yes vote in the 2014 referendum will mean a "a one-way ticket to send our children to a deeply uncertain destination". Mr Darling emphasised cultural, economic and social links he claimed were strengthened through Scotland being in the Union.

Mr Darling explained: "When Scotland votes in the referendum, we will face a historic choice which will shape our country and our families' futures, not just for the lifespan of a parliament, but for generations to come. "Chairing this campaign, is one of the most important things I have ever done in politics - the decision we make is the most important we will make in our lifetime." The Labour MP added: "We make a positive case for staying together. A positive case that celebrates not just what makes us distinctive but also celebrates what we share. "We put the positive case for staying together. We are positive about our links with the rest of the United Kingdom, through families and friendships, through trade and through shared political, economical and cultural institutions.”


However Mr Darling also launched a sustained attack on the SNP, rehashing many of the claims and arguments that have featured prominently in the Scottish media over the last few months. There were attacks on an independent Scotland’s economic prospects, the plan to maintain Sterling, membership of the EU and Scotland’s ability to send aid to less well of nations. No-Campaigners also claimed that Scots would be cut-off, with borders being introduced making the visiting of relatives difficult. Leaflets were circulated implying that Scots currently employed by English and Welsh firms would lose their jobs. Responding to Mr Darling’s speech, SNP leader and First Minister Alex Salmond said: “Alistair Darling’s use of smoke and mirrors during his speech exposes a campaign mired in negativity. His threadbare case against independence has been exposed by the weakness of his arguments, and his presentation suffered from three devastating failures.


“Firstly, he claimed that the Union was a ‘celebration’ of Scottish values, on the very day that the Prime Minister of that political union is proposing to eliminate housing benefit for young Scots. “There is no celebration of Scottish values in this Westminster Government’s policy toward young people, nor in the last Labour Government’s pursuit of an illegal war in Iraq.


“Secondly, the anti-independence campaign’s claim to be making a positive case has been exposed as a fraud. Alistair Darling’s presentation was littered with words such as ‘borders’, ‘division’ and ‘upheaval’ – expressing arguments better suited to the 18th century than to the 21st. “No rational person seriously believes that England would cease to be a major market for Scotland’s goods – and Scotland for England’s – following independence. “And equally no informed person would be unaware that Scotland is playing a world-leading role in tackling climate change – but Alistair Darling seemed to be unaware that it was the Scottish Parliament that was responsible for this, or indeed that our efforts have been praised by the UN Secretary General.


“Clearly, if it was up to Mr Darling, he would take these powers back to Westminster. “With achievements like these, it is no wonder that the Scottish Social Attitudes Survey has found that seven in ten Scots trust the Scottish Government to act in Scotland’s best interests, compared to just 18 per cent who trusted Westminster. “Thirdly, Alistair Darling said not a single word about the anti-independence campaign’s alternative vision of more powers for the Scottish Parliament.


“That is because – at heart – this is a Tory-led campaign, which is intent on conceding nothing to the people of Scotland, and hiding behind its refusal to spell out an alternative policy before the referendum. Urging people to vote no with only vague Tory promises of something else will only encourage more people to vote Yes to an independent Scotland. “On all three counts, the No campaign has had its weaknesses exposed, and Alistair Darling is operating as the frontman for a Tory-led campaign of relentless negativity toward Scotland and its prospects.


“As we learned last year in the Scottish elections, negative campaigns are only successful when they face another negative campaign. “Yes Scotland will be relentlessly positive as a winning antidote to the depressing negativity of the No campaign.” 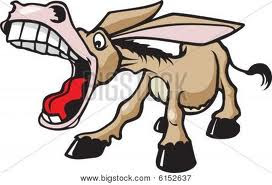 "BETTER TOGETHER" IS A DONKEY SANCTUARY IN IRELAND.


HOW VERY VERY APPROPRIATE, ONLY CAPTAIN DARLING COULD DO THIS.

WHERE'S CONAN WHEN WE NEED HIM?

GET ON THE PHOTOSHOP.

BEST STICK TO FLIPPING HOUSES CAPTAIN DARLING YOU ARE SO MUCH BETTER AT THAT.


I AM SO HAPPY YOU COULD NOT MAKE THIS UP!

Last night we saw on Newsnight the BBC Scotland news team aka Labour, at it again with their biased behaviour as we waited patiently as BBC Scotland reinterpreted the events, dwelling much on the edited highlights of Salmond calling Lord Levenson "Sir", and speculating on the hacked bank account angle and highlighting Elinir Goodman yawning, desperately desperately trying so hard it shone out to put Salmond down, but all they did was highlight their on lack of candour and partiality. Then we got to Brewer and the hapless Paul Martin, son of Gorbals Mick, in Glasgow with the familiar set up now of the SNP rep in a remote studio. This time it was Mark Macdonald from Edinburgh. Martin was allowed to babble on with the usual Scottish Labours smears and innuendo, and then mark Macdonald was allowed to speak, briefly as he was constantly interrupted and shouted down by Brewer the now familiar set up. Mark Macdonald exposed Paul martin who was starting to struggle badly so Brewer cut it short, exercising the escape route option, "right we'll have to leave it there" as they had obviously given Scottish Labour the chance to smear unchallenged, and now had the escape route planned as their position was exposed and cut to London. There we had two journalists, Rifkind and Hewett, who basically had Brewer grinding his teeth as they had now committed to the London escape route,with no other options, and it was going bad for Labour again as they both said that Alex Salmond had done very well, and had nothing to answer for. So most of the programme was used up with the BBC Scotland interpretation of the days proceedings, and two journalists from London whilst the Scottish angle from the two main parties was squeezed in to a 4 minute slot. Two minutes of interrupted dialogue from the "SNP accused." You could see the angry reaction from Mark Macdonald over Brewers shoulder, as he realised that once more the BBC had stitched the SNP up. However Mark do not despair the only people they are stitching up with their duplicity and bias is them selves and Labour. The anger and the disappointment of the BBC News team in Scotland, that they have failed once more to nail Salmond and the MSM is now palpable. http://www.bbc.co.uk/i/b01jyq17/
Posted by Key bored warrior. at 19:57 No comments:

BBC SCOTLANDS DEMONISATION OF THE SNP

THE FOLLOWING IS A COMPLAINT I PUT IN TO THE BBC TODAY: At the close of First Ministers question today the First Ministers reply to Kezia Dugdale was cut of as he was in the middle of answering what was essentially hypocrisy and lies regarding the Scottish apprentice ships scheme. The answer was very important to viewers in Scotland as it totally refuted her lies and showed once more as Michael McMahon had just done, what bitter negative losers Labour are in Holyrood. We were forced in to watch the Daily Politics whether we like it or not. Given that the main whinge we constantly hear from unionist supporters is that there is not enough debate on the real issue, what happened today was a travesty of journalism. And displayed a hostility towards the SNP that the BBC are not even trying to hide. At night we are frequently left hanging waiting for Newsnight to morph in to Newsnight Scotland, often as much as 10 minutes, then Newsnight Scotland is cut short. This is sending the clear subliminal signal to Scotland that we are inferior to the BBC in London and subservient to London in all things. Today's episode of FMQs confirmed for me what many people say, that the BBC is a unionist tool, owned by the Labour party in Scotland. You are a disgrace. Mark Thomson's statement as he appeared, tie less and unshaven in Hoyrood to discuss the BBC, that the BBCs customer satisfaction has never been higher was just propaganda given that he failed to provide any evidence. He was sending a very strong signal with his scruffy appearance. END.
Posted by Key bored warrior. at 19:49 No comments: