Gray Iain and his team are being marginalised by their own visceral hatred of the SNP. So much energy goes into opposing the SNP, and looking for anything to try to undermine them that they have become sterile and negative, full of vituperation, which is bordering on racism.

Tavish Scott can see the wrting on the wall come next year for Holyrood elections. The SNP are being wooed once more.


Gray lied to the Parliament regarding the aledged name changing of the Skills Development Scotland quango………… http://tinyurl.com/3ymcwsm…………… Unfortunately for Brian Taylor he leapt to Grays defence as he praised his performance at last FMQs regarding this…..http://tinyurl.com/3y2ovqy…..praising a liar Brian is not good karma.

Brian finished by saying…..”UPDATE AT 1644: Still more. Labour at Holyrood has now produced documentary evidence to back up its claim.
It has published a document dated 27 April this year which appears to be a detailed plan by Skills Development Scotland to phase in the use of The Works in signage, letterheads and the like. In an earlier statement, SDS says that an internal proposal to use The Works as a corporate brand was rejected by their directors on the 30th of March.”……having scanned every channel of news I can find no evidence of this document. Brian is seems will be wiping the egg from his ample chops.


Will we see Gray apologising to Parliament for his lies, and will Brian publish a correction on his blog?


The SNP should be holding Gray to account for his lies in Holyrood.
It was quite noticeable on the Politics Show that crooked mouth Glenn Campbell made a great fuss of questioning Gray on his lack of clarity on the budget cuts and his spokesman Kerrs statements to The Daily Mail asking Salmond to cut the budget immediately. But quietly avoided the issue of the Skills Development Scotland lies told by Gray.

(Campbell. Fanciful reconstructions derive it from the French de Campo Bello, but the likely source is the caimbeul, an Early Modern Irish or Gaelic by name meaning wry mouth, crooked mouth or twisted mouth, which refers to "the man whose mouth inclined a little on one side" or a dishonest person.) Ain't that the truth.


It was also very noticeable that no spokesman from the SNP was allowed to comment on the budget cuts article. Except that is a pre recorded piece from Stuart Stevenson defending the spurious allegations on the emissions target. What a scandalous disgrace BBC Scotland have become, they are worse than Pravda, and just as blatant.
Posted by Key bored warrior. at 20:12 3 comments:

An old cowboy went to a bar and ordered a drink. As he sat there sipping whiskey, a young lady sat down next to him.


She turned and asked, "Are you a real cowboy?"


He replied, "Well, I've spent my whole life on the ranch, herding cows, breaking horses, mending fences, so I guess I am." He then asked her what she was.


She replied, "I'm a lesbian. I spend my whole day thinking about women. As soon as I get up in the morning I think of women, when I eat, shower, watch TV, everything seems to make me think of women."


A little while later a couple sat down next to the old cowboy and asked him, "Are you a real cowboy?"


Why do women rub their eyes when they wake up in the morning? Because they don't have balls to scratch.
Posted by Key bored warrior. at 13:19 3 comments:

Email ThisBlogThis!Share to TwitterShare to FacebookShare to Pinterest
Labels: Lesbians

Thanks Scunnert, if you were describing the working of a Harley engine I might have a chance, but I am a complete ignoramus at this code thingy. here is what it looks like:

Your HTML cannot be accepted: Tag is not closed: EMBED

I cannot see the symbols you have describe before the "embed."

And what causes the code to be rejected, if it seems to work on another blog?

JACKIE BAILEY LYING THROUGH HER TEETH


Glenn Campbell trying his best with his usual constant interruptions to trip up Nicola Sturgeon. Nicola has more ability in her little finger than Campbell and Bailey have in their whole bodies. And I make no apologies for saying this in Baileys case that is a lot of body. You really would think that Labour would have the good sense to put up a better example of good health practise as a health spokes person than the obese Bailey. Credibility goes a long way. If your only talent is to lie through your teeth you need to look as if you know what the subject is about, and you understand what health is about. She patently fails on every count. Her constant shaking of her head which is unfortunately attached to her fulsome chins makes her look even more ridiculous.

Nicola Sturgeon is one of the bright shining lights in the political landscape in Scotland, and thank God for her. She is bright articulate and far to smart for the likes of Campbell and Bailey. Despite Campbell's best effort she stuck to her guns, and in a dignified and well mannered tone took them both down and exposed their hypocrisy.

When I tried to embed this video clip into the post I got a message saying that the code was not closed at embed, so I closed it and still it would not embed, can any one help with this?
Posted by Key bored warrior. at 09:30 4 comments:

There is no Brown in a rainbow!
Posted by Key bored warrior. at 21:28 No comments:

Brown has fallen on his sword Cameron is at the Palace.

God help Scotland. Betrayed by Labour for the last time.
Posted by Key bored warrior. at 20:32 No comments:

Email ThisBlogThis!Share to TwitterShare to FacebookShare to Pinterest
Labels: Labour


Boulton should have nutted that bastard Campbell, and stuck his drones up his arse, what a cretin what a Campbell.
Posted by Key bored warrior. at 20:16 1 comment:

I would congratulate you on managing to hold your seat in the election yesterday, but the lack of grace you showed afterwards stops me from doing so.

I watched your little rant on BBC1 last night. I won't pretend that I'm not an SNP voter, and as such you'll probably think I'm biased or just plain wrong; but the fact is what you said was an utter disgrace, and you made a complete embarrassment of yourself. I'm ashamed that we have people like you representing us. After lying for the whole election that only a Labour victory would secure Scotland against the Tories, and thus making the SNP an irrelevance, I was amazed to see you suddenly launching into a vitriolic attack against the democratically elected Scottish Government, which suggested they were not the irrelevance you liked to pretend they were. I'm not at all surprised when you spout your ill-informed opinions about how well the SNP administration has performed in Scotland, and to be honest you're perfectly entitled to your opinions; but your assertions that the SNP had gone backwards was nothing but an absolute lie.

Hmmm... looks pretty similar to me. If your idea of "backwards" is to return the exact same number of seats as last time, and to increase vote share by over 2%, then it would seem every party in Scotland is going backwards. There's an interesting discussion there of course, about how your party's negative campaign tactics are keeping Scotland back, but you won't listen to it, so I won't bother trying.

Alex Salmond is to be commended for ignoring the petulant remarks by people like you and Douglas Alexander, and instead extending a hand to the Labour party. He does this because the SNP truly do care about Scotland - if they were the self-serving party you always claim them to be, he'd be on the phone to David Cameron right now. But as we now know, that is never going to happen.

I'll say it again: you're an utter disgrace.

Douglas Daniel of AlbaMatters blog not me.
Posted by Key bored warrior. at 19:35 1 comment:

Well done SNP for increasing your vote in the face of blatant lies and hostility. For Murphy, Alexander and Gray Iain to claim this is the SNP moving backwards shows us how bitter and deluded these now irrelevant and useless MPs are, there obsession witht he SNP is very telling.

(Incidentally, bearing in mind the fuss Labour held over Alex Salmond being both an MP and MSP, will Margaret Curran and Cathy Jamieson be giving up their seats in Holyrood now that they've been elected to Westminster, or should we expect the usual do-as-we-say-not-as-we-do? More importantly, will the media play the same role they did against the SNP? Don't hold your breath...

Who 's image will be carved into salisbury crag?

Posted by Key bored warrior. at 11:07 No comments: 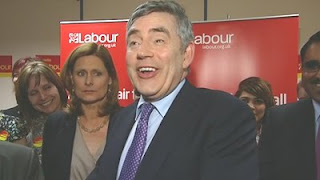 If someone I knew carried on like that and did that Baboon smile thing he does, I would keep hitiing him until he stopped.

No wonder poor Sarah Brown has the look of a worried social worker on her face every time she is forced out with Gordon. She knows just how ill this nutter is.

Please God do not let this man near the House of Commons again.
Posted by Key bored warrior. at 20:23 4 comments: