The Myths the Myths, the Shetland and Orkney sagas.

Continental shelf: If Westminster retains control of Shetland, Orkney and Rockall, Scotland will have no oil resources.

If Scotland becomes independent Westminster won't be able to hang on to Shetland, Orkney, Rockall or any other part of Scotland (see: Shetland and Orkney).

However, even under the hypothetical circumstance that this occurred, Westminster wouldn't be able to retain control of the oil fields anyway, so ya boo sux. These matters are regulated by the UN Convention on the Law of the Sea, to which the UK is a signatory. International law specifies that a state controls the continental shelf and associated mineral and fishing rights up to 200 nautical miles (230 miles or 370 km) off its shores. When another state possesses an island within the continental shelf of this state, special rules apply.

The continental shelf off the Atlantic coast is Scotland's to exploit and develop, even if Westminster clung on to Rockall like a plook on the face of an adolescent sociopath. According to the Law of the Sea: "rocks which could not sustain human habitation or economic life of their own would have no economic zone or continental shelf." Westminster could pauchle its way to keeping Rockall, but as far as oil and fishing exploitation rights are concerned, they'd be entitled to rockall.

Neither would Westminster gain much by holding onto Shetland and Orkney. When an island belonging to one state sits on the continental shelf of another state, the islands are treated as enclaves. This matter was discussed in detail in a legal paper published by the European Journal of International Law: Prospective Anglo-Scottish Maritime Boundary Revisited 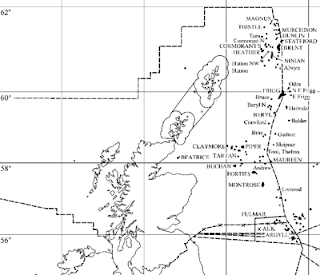 Most of the rights to the continental shelf would remain Scottish, Map 2 on page 29 of the legal paper shows the most likely sea boundaries. Westminster would be entitled only to a small zone around the islands, and the waters between Orkney and Shetland. This area contains no oil fields. If Shetland and Orkney were to remain under Westminster's control, Shetland would no longer have an oil fund. The map is reproduced here, so you can do a reverse Jeremy Paxman and sneer derisively at Westminster's pretensions.

Westminster's Shetland threat is a bluff. Westminster knows it's a bluff. They just don't want us to know too.

Credit rating: Scotland would lose the AAA credit rating it enjoys as part of the UK.

This scare story is based upon a single article in the Financial Times. It's all based on the unresearched opinion of a single guy in a trading room somewhere in the City of London, that noted hotbed of pro-Scottish independence sentiment. It was a guess, as was reported in the original report in the Financial Times. We could just as legitimately "guess" that Scotland would have a secure AAA rating but what's left of the UK would be downgraded to a ZZZ. Zzzz is the best response to these scare stories.

Credit ratings are based upon the market's assessment of whether creditors are likely to get their dosh back if they lend it to a government. There are many countries of Scotland's size which have a triple A credit rating, most of which are not blessed with Scotland's embarrassing abundance of natural resources, a healthy tourism industry, the whisky trade, an English speaking populace with easy access to European markets, and a budget surplus over the past five or six years - despite the financial crisis.

The recent news that the UK and the Bank of England have been put on a negative outlook by the credit ratings agency Moody's shows that the much prized AAA rating is by no means secure within the UK.
Posted by Key bored warrior. at 19:45 3 comments: