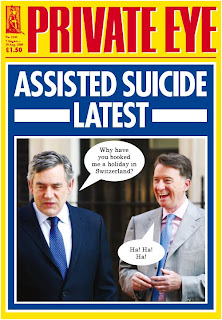 Posted by Key bored warrior. at 11:15 No comments:

Email ThisBlogThis!Share to TwitterShare to FacebookShare to Pinterest
Labels: Brown, Mandy and Brown and vaseline.

The SNP need to up their game that much is obvious from the open goal they had in Glasgow NE and they skeylfed the ball wide.

Labour have shown that they are prepared to be as dirty and as illegal as they can get away with to win, they win ugly. The SNP need to get down in the sewer with Labour and start grabbing them by the bollocks and squeezing. The SNP message is a good one, Labour know that, which is why they lied through their teeth and got away with it in Glenrothes and Glasgow NE. I have shouted at the TV when watching Nicola and Hosie and others being so bloody nice, when they should be fighting mad and telling Glenn Campbell and the biased media to shut the fuck up and listen. Bains campaign was nasty, but it will get worse come the Scottish elections. And the GE. The SNP needs an Alastair Campbell, or independence will wither on the vine.

Alex Salmond I know you are an avid reader of my blog ;o)) so listen. Stop trying to be the funny man, the cheeky chappy. Stop your bloody sniggering and smirking, stop doing that we laugh that you and Nicola do in between syllables. Stop shouting your head of in Holyrood and keep cool and nail the bastards with the sword of truth. You are a good communicator and debater, cut out the sarcasm you are better than that. Nail them with the truth, stuff their bloody lies down their rotten throats. You are intelligent and shrewd, use these clubs and drive the ball down the middle of the fairway, you can buy and sell the lot of them. People do not like smug and sneery politicians. Look at how Mandelson is hated.

Scotland desperately needs a saviour right now to deliver independence, be that man, leave your ego at home, be humble and ruthless, give them no quarter. If you cannot then let some one who can take over.
Posted by Key bored warrior. at 20:01 1 comment:

Email ThisBlogThis!Share to TwitterShare to FacebookShare to Pinterest
Labels: SNP

Sometimes I read something that really cheers me up and Clarkson like Basil Fawlty and Baldrick can do that no matter how glum I feel. Lord Fondleboy is his target in the following but there are a few others I would like to see on the bumper as well. He should start a range of front bumper stickers.

PS. Please God if you can organise an SNP win tomorrow by just 1 vote I will go to church every Sunday, on my way to the pub.

I spotted this earlier by Jeremy Clarkson in the Times. Great article

I’ve given the matter a great deal of thought all week, and I’m afraid I’ve decided that it’s no good putting Peter Mandelson in a prison. I’m afraid he will have to be tied to the front of a van and driven round the country until he isn’t alive any more.
He announced last week that middle-class children will simply not be allowed into the country’s top universities even if they have 4,000 A-levels, because all the places will be taken by Albanians and guillemots and whatever other stupid bandwagon the conniving idiot has leapt

I hate Peter Mandelson. I hate his fondness for extremely pale blue jeans and I hate that preposterous moustache he used to sport in the days when he didn’t bother trying to cover up his left-wing fanaticism. I hate the way he quite literally lords it over us even though he’s resigned in disgrace twice, and now holds an important decision-making job for which he was not elected. Mostly, though, I hate him because his one-man war on the bright and the witty and the successful means that half my friends now seem to be taking leave of their senses.

There’s talk of emigration in the air. It’s everywhere I go. Parties. Work. In the supermarket. My daughter is working herself half to death to get good grades at GSCE and can’t see the point because she won’t be going to university, because she doesn’t have a beak or flippers or a qualification in washing windscreens at the lights. She wonders, often, why we don’t live in America.

And they see Alistair Darling handing over £4,350 of their money to not sort out the banking crisis that he doesn’t understand because he’s a small-town solicitor, and they see the stupid war on drugs and the war on drink and the war on smoking and the war on hunting and the war on fun and the war on scientists and the obsession with the climate and the price of train fares soaring past £1,000 and the Guardian power-brokers getting uppity about one shot baboon and not uppity at all about all the dead soldiers in Afghanistan, and how they got rid of Blair only to find the lying twerp is now going to come back even more powerful than ever, and they think, “I’ve had enough of this. I’m off.”

It’s a lovely idea, to get out of this stupid, Fairtrade, Brown-stained, Mandelson-skewed, equal-opportunities, multicultural, carbon-neutral, trendily left, regionally assembled, big-government, trilingual, mosque-drenched, all-the-pigs-are-equal, property-is-theft hellhole and set up shop somewhere else. But where?

The Caribbean sounds tempting, but there is no work, which means that one day, whether you like it or not, you’ll end up like all the other expats, with a nose like a burst beetroot, wondering if it’s okay to have a small sharpener at 10 in the morning. And, as I keep explaining to my daughter, we can’t go to America because if you catch a cold over there, the health system is designed in such a way that you end up without a house. Or dead.

Canada’s full of people pretending to be French, South Africa’s too risky, Russia’s worse and everywhere else is too full of snow, too full of flies or too full of people who want to cut your head off on the internet. So you can dream all you like about upping sticks and moving to a country that doesn’t help itself to half of everything you earn and then spend the money it gets on bus lanes and advertisements about the dangers of salt. But wherever you go you’ll wind up an alcoholic or dead or bored or in a cellar, in an orange jumpsuit, gently wetting yourself on the web. All of these things are worse than being persecuted for eating a sandwich at the wheel.

I see no reason to be miserable. Yes, Britain now is worse than it’s been for decades, but the lunatics who’ve made it so ghastly are on their way out. Soon, they will be back in Hackney with their South African nuclear-free peace polenta. And instead the show will be run by a bloke whose dad has a wallpaper shop and possibly, terrifyingly, a twerp in Belgium whose fruitless game of hunt-the-WMD has netted him £15m on the lecture circuit.

So actually I do see a reason to be miserable. Which is why I think it’s a good idea to tie Peter Mandelson to a van. Such an act would be cruel and barbaric and inhuman. But it would at least cheer everyone up a bit. onto in the meantime.
Posted by Key bored warrior. at 20:09 1 comment:

We will remember them.

They went with songs to the battle, they were young,
Straight of limb, true of eye, steady and aglow.
They were staunch to the end against odds uncounted;
They fell with their faces to the foe.

They shall grow not old, as we that are left grow old:
Age shall not weary them, nor the years contemn.
At the going down of the sun and in the morning
We will remember them.
Posted by Key bored warrior. at 19:37 No comments: